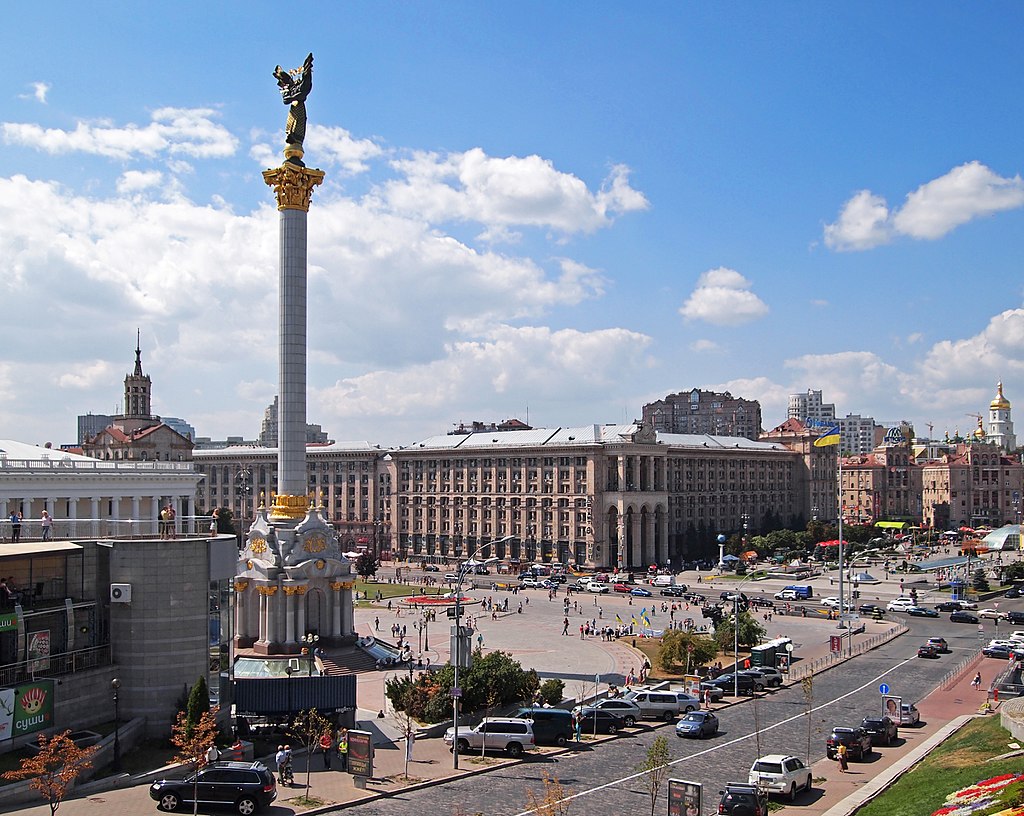 Kyiv is an important industrial, scientific, educational and cultural center of Eastern Europe. It is home to many high-tech industries, higher education institutions, and historical landmarks. The city has an extensive system of public transport and infrastructure, including the Kyiv Metro.

The city’s name is said to derive from the name of Kyi, one of its four legendary founders. 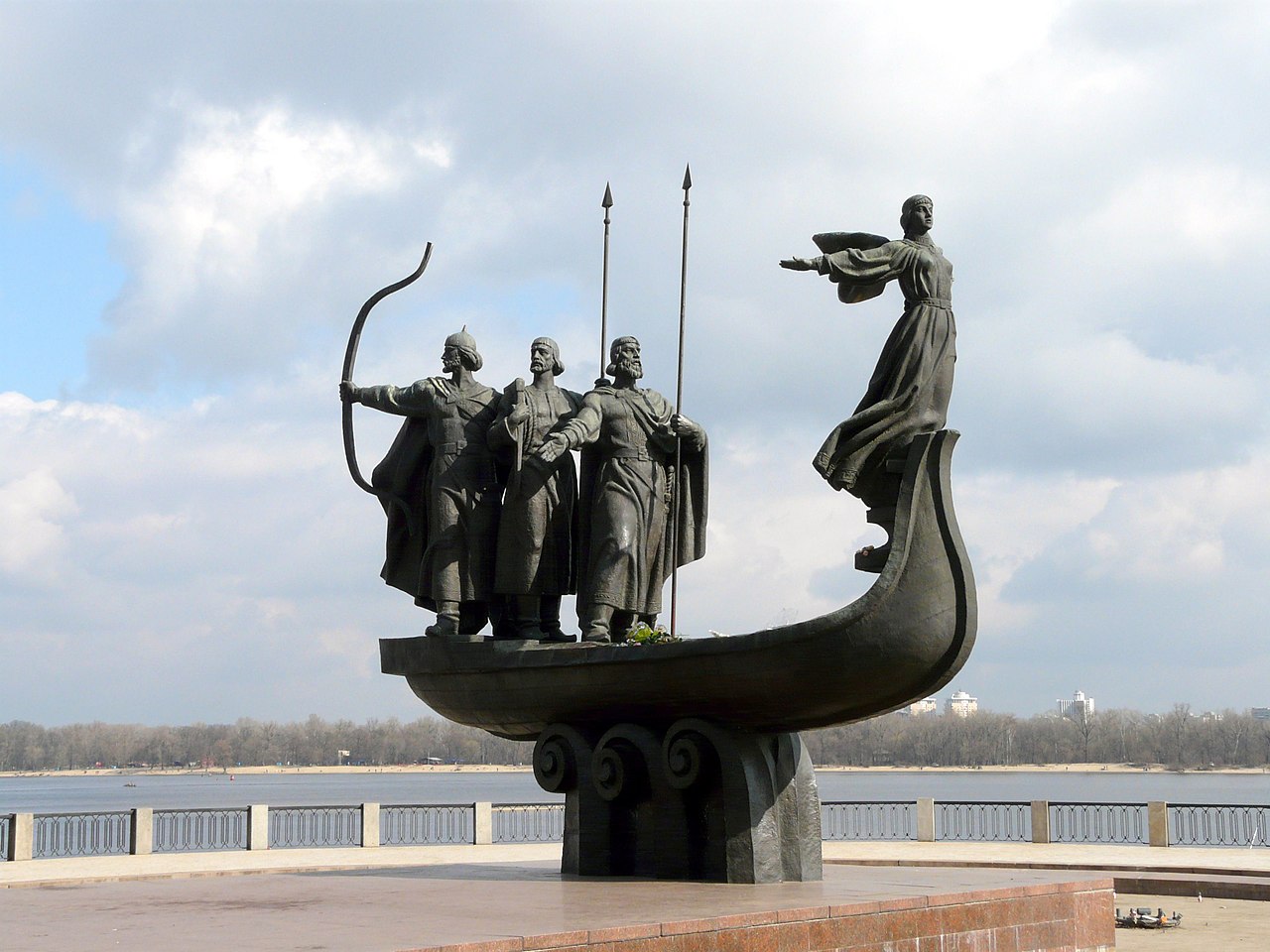 During its history, Kyiv, one of the oldest cities in Eastern Europe, passed through several stages of prominence and obscurity. The city probably existed as a commercial center as early as the 5th century. A Slavic settlement on the great trade route between Scandinavia and Constantinople, Kyiv was a tributary of the Khazars,  until its capture by the Varangians (Vikings) in the mid-9th century. Under Varangian rule, the city became a capital of the Kievan Rus’, the first East Slavic state. 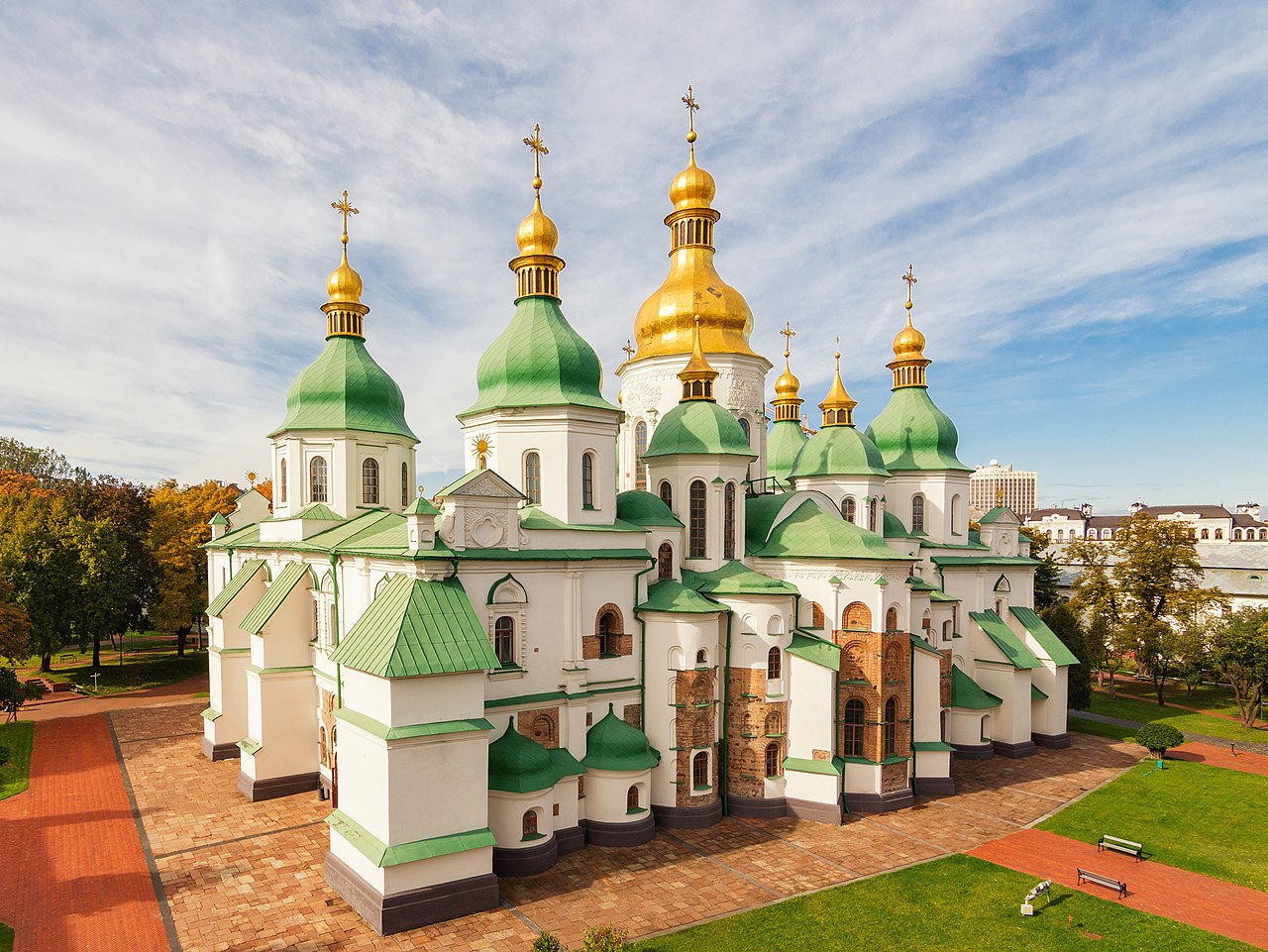 Completely destroyed during the Mongol invasions in 1240, the city lost most of its influence for the centuries to come. It was a provincial capital of marginal importance in the outskirts of the territories controlled by its powerful neighbors, first Lithuania, then Poland and Russia. The city prospered again during the Russian Empire’s Industrial Revolution in the late 19th century. 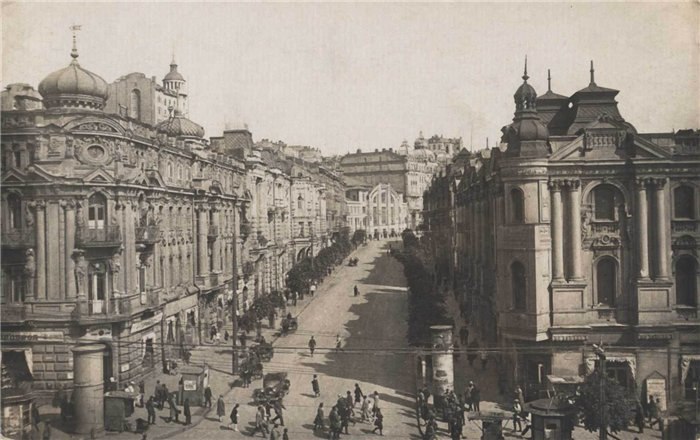 In 1918, after the Ukrainian People’s Republic declared independence from Soviet Russia, Kyiv became its capital. From 1921 onwards Kyiv was a city of Soviet Ukraine, which was proclaimed by the Red Army, and, from 1934, Kyiv was its capital. The city was almost completely ruined during World War II but quickly recovered in the postwar years, remaining the Soviet Union’s third-largest city. 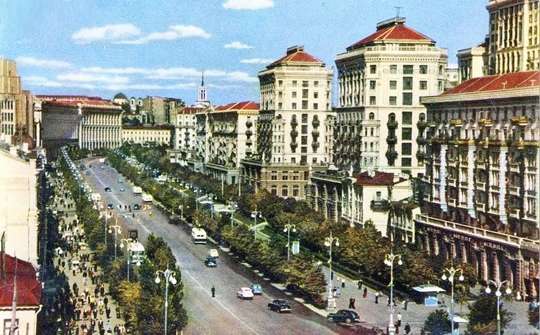 Following the Ukrainian independence in 1991, Kyiv remained Ukraine’s capital and experienced a steady influx of ethnic Ukrainian migrants from other regions of the country. During the country’s transformation to a  market economy and electoral democracy, Kyiv has continued to be Ukraine’s largest and wealthiest city.

The city stands on the Dnieper River just below its confluence with the Desna and 591 miles (951 km) from its mouth in the Black Sea. The original location was on the high and steep right (western) bank, which rises above the river in an imposing line of bluffs culminating in Batyyeva Hill, 330 feet (100 metres) above mean river level. This precipitous and wooded bank, topped by the golden domes and spires of churches and bell towers and by high-rise apartment buildings, makes the city an attractive and impressive sight from across the Dnieper. Since World War II, Kyiv has extended onto the wide, low, and flat floodplain on the left (eastern) bank. 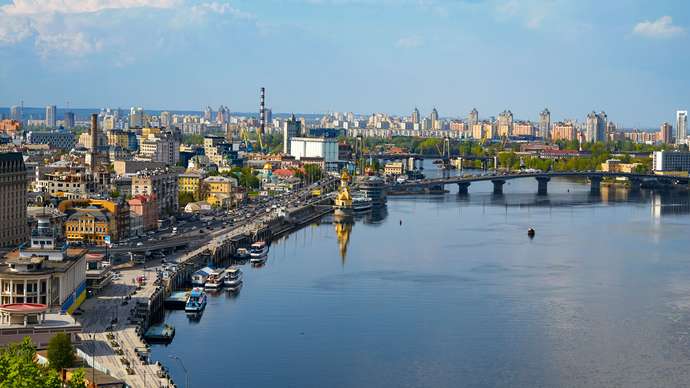 Climate
Kyiv has a moderately continental climate. The average January temperature is −6 °C, and winter days with temperatures above freezing are not uncommon. In cold spells with a northerly or northeasterly airstream, temperatures may drop sharply, and an absolute minimum of −33 °C has been recorded. Snow cover lies usually from mid-November to the end of March; the frost-free period lasts 180 days on average but in some years surpasses 200 days. Summers are warm, with a July average of 20 °C and a recorded maximum of 39 °C. The mean annual precipitation is 25 inches (635 mm), with maximum rainfall in June and July.

City layout
The city limits enclose an area of 300 square miles (780 square km) on both banks of the Dnieper. It is divided into a number of administrative wards. The focus of Kyiv is the area of the ancient Upper Town, crowning the high bluffs of the Dnieper. Although largely of postwar construction, this central area retains its old street pattern, and most of the surviving historical and architectural monuments are located there. First among these is the cathedral of St. Sophia (figure 3), now a museum. 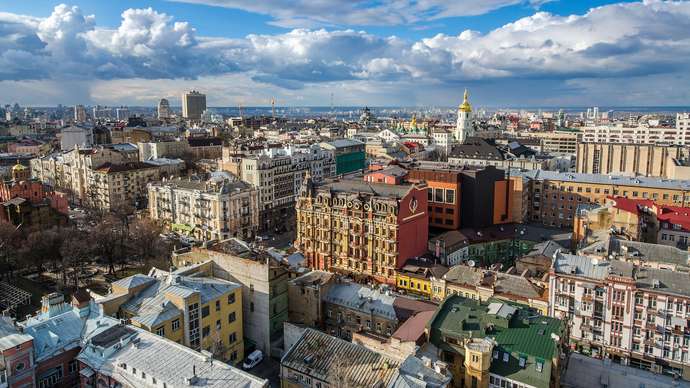 Close by is the Baroque church of St. Andrew, designed by Bartolomeo Rastrelli and built in the mid-18th century; its site on the crest of the steep slope to the river makes it a striking landmark. Other historical relics in the central area include the ruins of the Golden Gate, also built in the 11th century in the reign of Yaroslav; the Zaborovsky Gate, built in 1746–48; and the remains of the Desiatynna Church, or Church of the Tithes, built in 989–996 by Grand Prince Volodymyr. 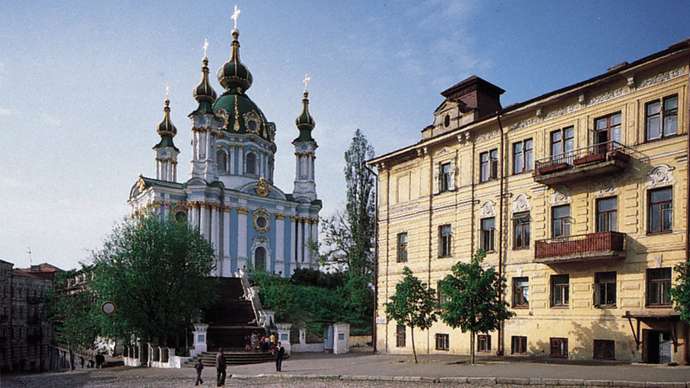 Within and immediately adjacent to the area of the former Old Town are many of the city’s museums, theatres, and public buildings as well as the principal shops. The axis of the centre is the street known as Khreshchatyk, which runs along the bottom of a small valley the sides of which have in part been landscaped with terraced gardens interspersed with tall, modern office and apartment buildings. Perhaps the most notable public square along Khreshchatyk is Maidan Nezalezhnosti (Figure 1).

Economy Of Kyiv
Kyiv, as the capital of Ukraine, has major administrative functions, with considerable employment in the offices of ministries responsible for the economy. The city is also an important industrial centre, possessing a wide range of manufactures. Factories are found in all quarters of the city, with major concentrations to the west of the city centre and on the left bank of the Dnieper.

Transportation
Transportation for the industries and for the city as a whole is provided by a good network. Trunk railways and all-weather roads link Kyiv to Kharkiv and the Donets Basin in eastern Ukraine, to southern Ukraine and the port of Odessa, and to western Ukraine and Poland. The navigability of the Dnieper has been improved by a series of barrages and reservoirs. Boryspil International Airport operates direct flights to many Ukrainian towns and international service to major cities throughout Europe, Asia, and North America. Within Kyiv itself there is efficient subway and rail, bus, streetcar, and trolleybus service.

Health and education
The city is well provided with health facilities, including general and specialized hospitals and local polyclinics, the latter serving residential neighbourhoods. A number of nursery schools and day-care centres care for children below school age. In addition to numerous primary schools, there are a large number of general secondary schools, evening schools for adults, and specialist technical schools.

The Taras Shevchenko National University of Kyiv (Kyiv University) heads an array of institutions of higher education. The National aviation University is one of the most powerful universities in Kyiv. 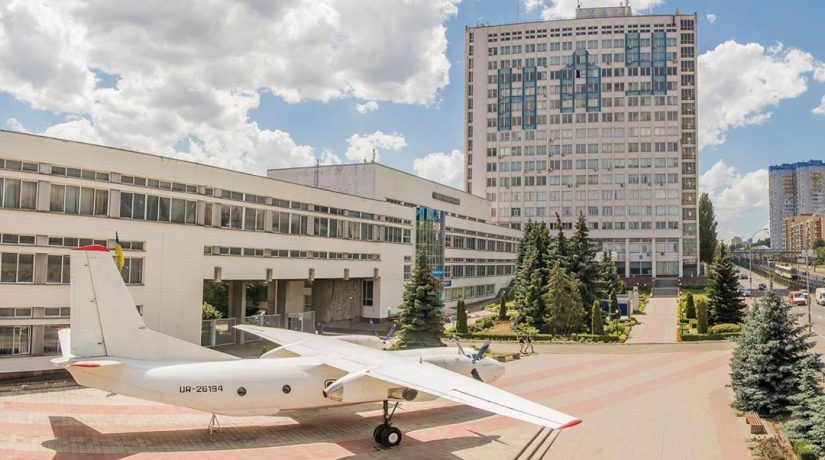 A range of research establishments are run by the National Academy of Sciences of Ukraine, which also maintains a large library. Kyiv is noted for medical and cybernetic research. The emphasis on applied research is illustrated by the academy’s renowned Ye. O. Paton Institute of Electrical Welding.

Cultural life
Kyiv’s ancient tradition as a cultural centre is still vigorously alive. There are several theatres, notably the Taras Shevchenko National Opera of Ukraine. Plays are presented at the Lesia Ukrainka and Ivan Franko theatres, among other venues. In addition, there are youth, open-air, and musical comedy theatres. 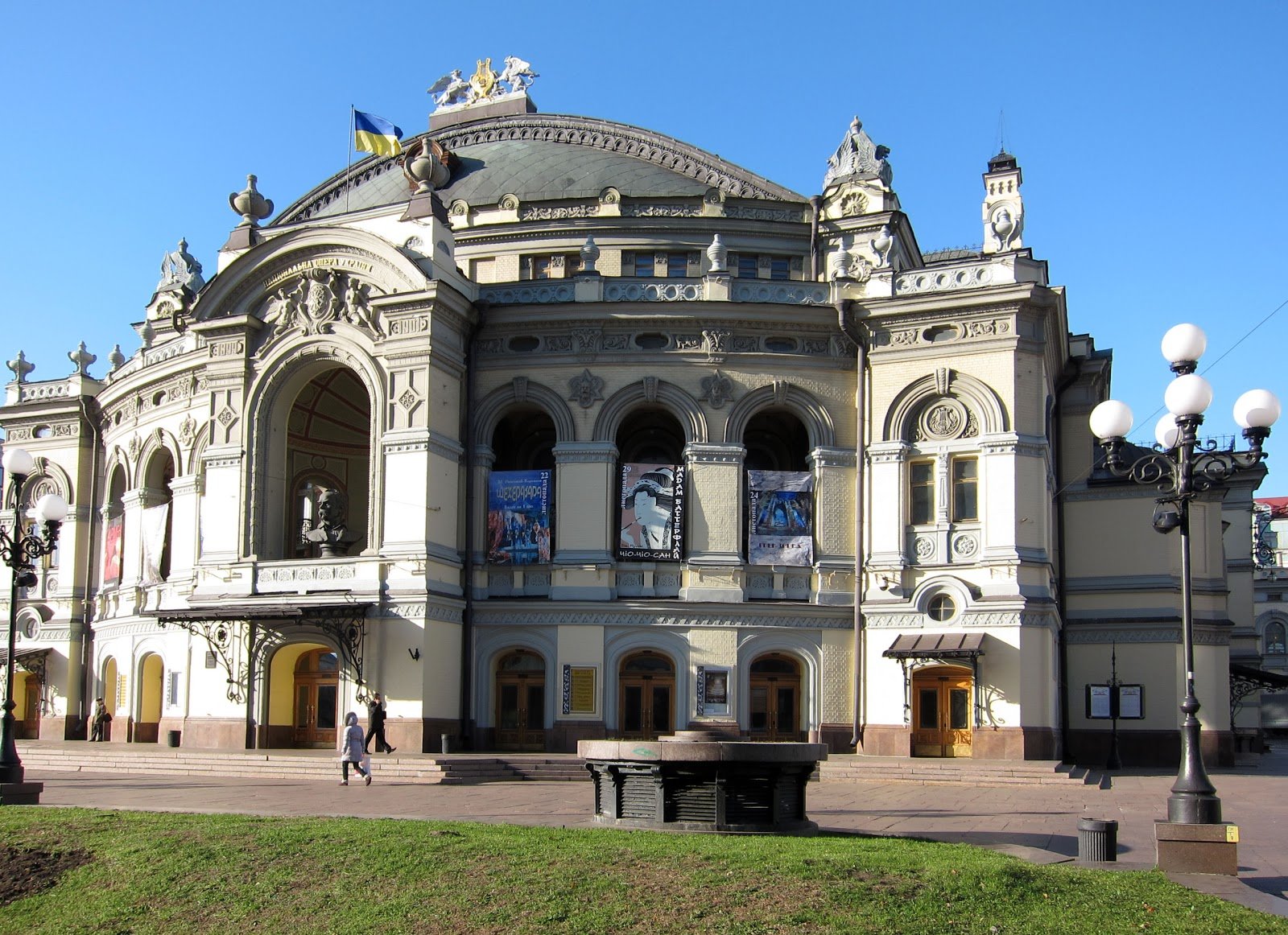 Kyiv has good facilities for sports and recreation. Among the largest of its several stadiums are the Olympic Stadium, home of the Dynamo Kyiv association football (soccer) club, and the Palace of Sports. Olympic Stadium also hosted the final of the 2012 European Championship. Aquatic sports take place on the reservoir of the dam at Vyshhorod and also on Trukhaniv Island in the Dnieper opposite the city centre, where there is a beach and water sports centre. Around the outskirts of the city are health resorts, sanatoriums, and children’s holiday camps. 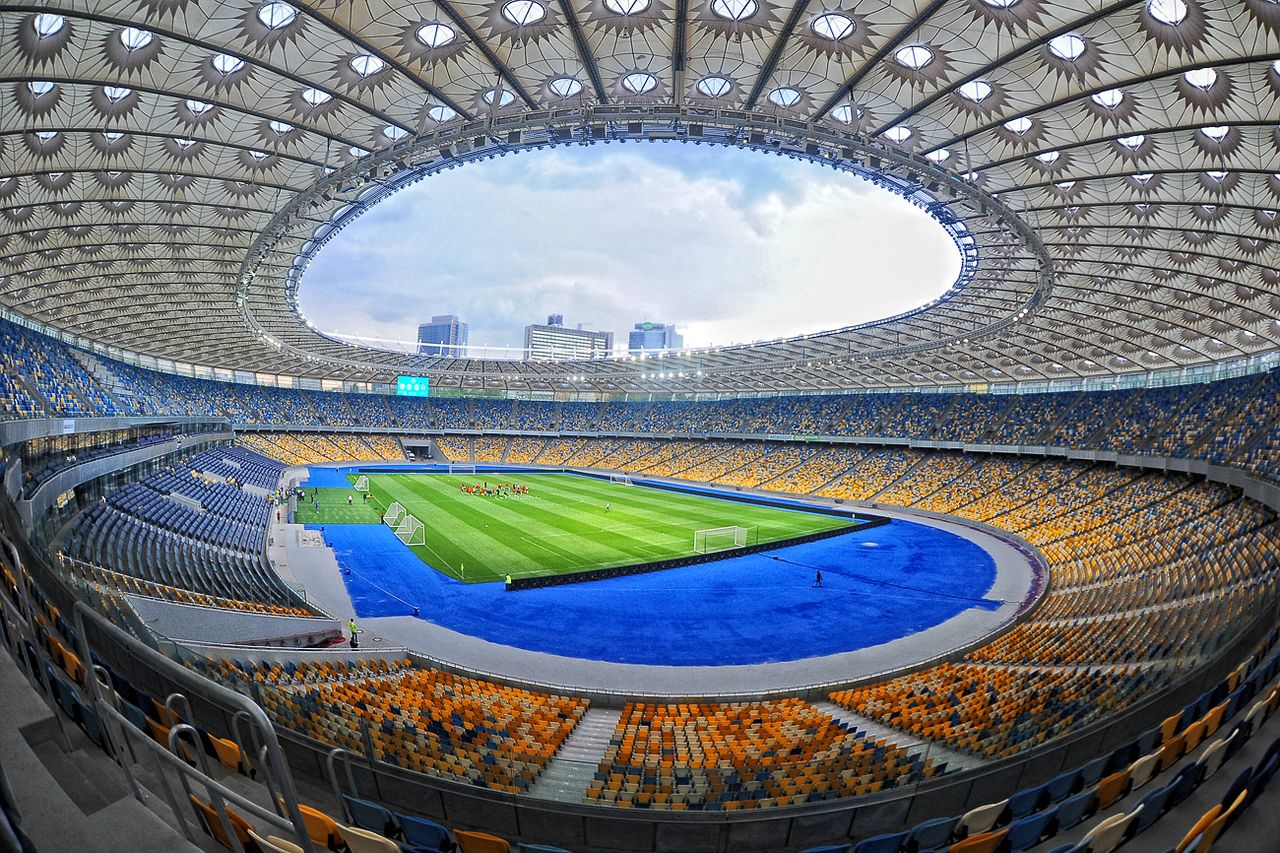